You are here: Home / The Gaia Journals / Flower Shop / Delving into the theory and meaning of Gaia

What’s in a business name? Well, here at Gaia Flowers we hope our business name tells you something about our ethics.

Never heard the word ‘Gaia’ before? Consider this article our big reveal. It answers the question “What does ‘Gaia’ mean?” by explaining the name’s origins and its modern-day scientific meaning. Once you understand what it is, how we work here at Gaia Flowers and the approach we take to selling sustainable bouquets, arrangements and plants, it will all fall into place. 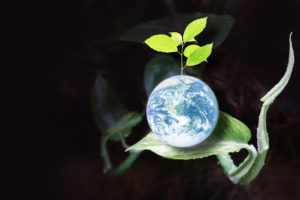 What does ‘Gaia’ mean?

Understanding Gaia means traveling back to Ancient Greece and delving into mythology. This was a time when stories of all-powerful gods and goddesses explained the way of the world and every creature’s place in it. Our quest to understand Gaia begins with the first Goddess, the primordial celestial being.

In Greek, the word for Earth is ‘Gi’ (pronounced ‘gee’). The name ‘Gaia’ comes from this word and was the name of the Earth goddess. Considered the mother goddess, she was the personification of the Earth’s spirit. From her the world was born, and her creation brought calm to an otherwise chaotic universe.

Alone, she created the mountains and the oceans. But Gaia longed for company. Her infinite power allowed her to create her equal: Uranus, the god of the sky and Heavens. From their union, time was created. As were the Titans, a group of 12 gods and goddesses who preceded the Olympian Greek gods we are more familiar with such as Zeus, Hera, and Hades.

Being the mother goddess, Gaia cared for all who lived within her, keeping careful watch so life could thrive.

So, Gaia Flowers is named after a Greek goddess?

Yes and no. Gaia and what she symbolized—being a motherly figure, caring for all who lived—was the name given to a scientific hypothesis. And rather than the belief in an ancient goddess, it’s the Gaia hypothesis (and modern adoption of this theory by environmental movements) that guides much of what we do here at Gaia Flowers.

A brief overview of the Gaia theory

Brace your mind for a gear shift. We’re moving from the romance and drama of Ancient Greek mythology to scientific theory.

The Gaia hypothesis was first published in 1972 by scientist and inventor James Lovelock and microbiologist Lynn Margulis. At the core of their Gaia theory is the ‘[proposal] that all organisms and their inorganic surroundings on Earth are closely integrated to form a single and self-regulating complex system, maintaining the conditions for life on the planet.’

That’s a pretty mind-blowing idea to fit into one sentence. So let’s break down what they’re saying.

Lovelock and Margulis theorize that:

Gaia theory suggests Earth’s intelligence reaches so far as understanding what’s needed to keep life… well, alive. The cycles and patterns it runs through maintain an equilibrium that makes life on Earth possible. Of course living things, being the curious, intelligent creatures that we are, have influenced the Earth’s natural system. Lovelock understood this.

For a long time, parts of the scientific community doubted the Gaia theory. But in an article they wrote for The Conversation, academics James Dyke and Tim Lenton stated they believed it was possible to find the evidence that would prove the theory using a mechanism called ‘sequential selection.’

Dyke and Lenton believe this theory can be tested in one of two ways.

Gaia and the environmental movement

Given the climate crisis on our doorstep, it’s hardly surprising that Gaia theory is attracting greater attention. In humanity’s search for ways to protect and undo damage to Mother Earth (largely by burning greenhouse gasses), Gaia theory and the personification of Gaia as a caring goddess provides many of us with the motivation to take action. Earth Day is a perfect example of this.

Our determination to protect Mother Earth is almost a return to Ancient Greek mythology, where our journey into the meaning of Gaia began. The difference now is that we better understand the limits we’ve pushed Gaia to. It’s now our turn to take care of the Earth Mother, just as she has supported us for so long.

Whether the Gaia hypothesis is scientifically accurate or not, we now know that life and how we live it undeniably influences Earth. For us, helping Gaia stabilize and not pushing her limits any further means:

It’s taken time to make Gaia Flowers as Gaia-friendly as possible, and we remain realistic. We understand we’re not perfect, and there are times when the viability of the business must take priority. But we hold these values close to the heart of our business, and will always work hard to do more whenever possible.

Now that you know what Gaia means and how it guides us, get to know us a little better.

See what plants and flowers we currently have in stock.

You can find out more about which cookies we are using or switch them off in settings.

This website uses cookies so that we can provide you with the best user experience possible. Cookie information is stored in your browser and performs functions such as recognising you when you return to our website and helping our team to understand which sections of the website you find most interesting and useful.

Strictly Necessary Cookie should be enabled at all times so that we can save your preferences for cookie settings.

If you disable this cookie, we will not be able to save your preferences. This means that every time you visit this website you will need to enable or disable cookies again.